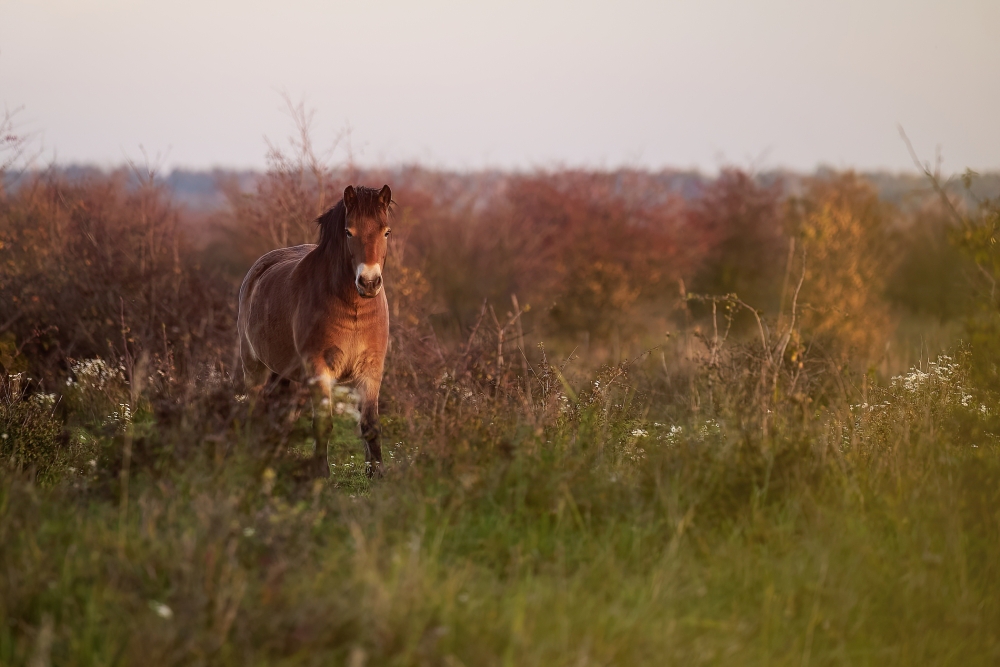 Where to go on a trip?

I regularly visit the Milovice Nature Reserve for several reasons. Occasionally, there are bee-eaters in the reserve, here and there there is a mention of the hoopoe, but most often I visit the reserve to observe and of course photograph wild horses, aurochs and bison. During my last trip, when I first visited the Štěpánka Park in Mladá Boleslav, I also visited Milovice, where I again spent a few moments in the presence of the above mentioned animals. I was lucky enough to be close to wild horses, even though the aurochs came into my view for a while. I would therefore like to share with you some photos from this trip. The article also includes some information about the breeding of horses in the reserve, which I borrowed with appropriate citation from the official website of the reserve.

However, wild horses that were almost extinct in Europe, domesticated or crossbred many times, have survived to the present day. Not on the continent, but on the British Isles in the rugged Exmoor region. There, the first written record of them dates from 1086, when their herds are mentioned in the so-called Book of Judgement. They were listed in the game lists of the Royal Game Reserve. State-of-the-art genetic analyses have shown that Exmoor horses match the original wild horses of central and western Europe in size, conformation and colour. In addition, several unique genetic traits have recently been identified in Exmoor horses, which are the only ones they share with the native wild horses of Europe. Unlike other breeds such as the Hucul, Dulmen pony and others, they have not been intensively bred with other breeds in the past. (Source: Divoký kůň (Equus ferus) | Česká krajina. Domů | Česká krajina [online]. Copyright © Copyright 2009 [cit. 20.10.2022]. Dostupné z: https://www.ceska-krajina.cz/klicove-druhy/divoky-kun-equus-ferus/) 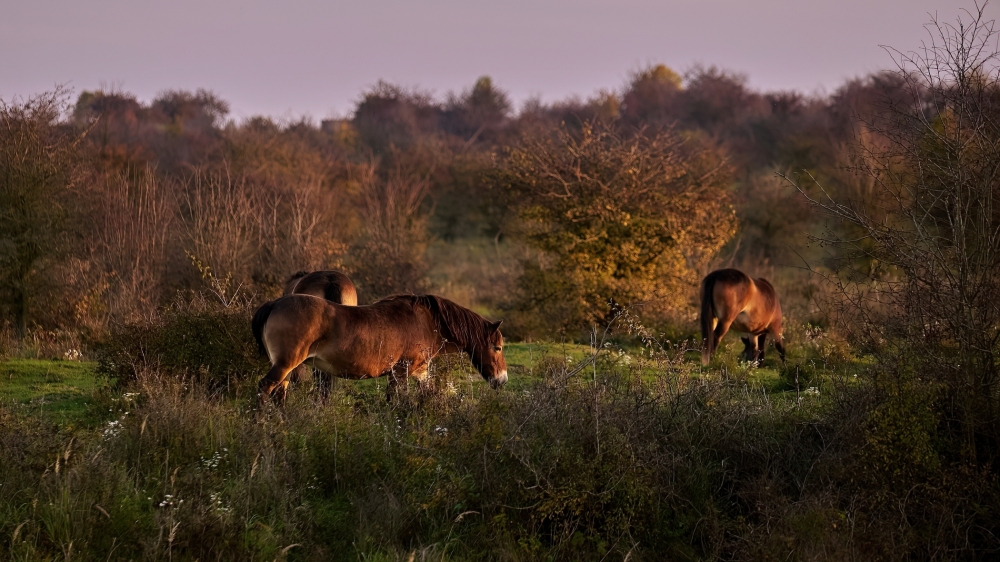 The herd of wild horses comes from Exmoor, England. The first written record of them is from the so-called Book of Judgement in 1086. In England, for centuries, they were simply called “wild horses”. Since the 19th century, this horse has also been known as the Exmoor or Celtic pony. In appearance, size and colouring, it corresponds to the original wild horses of Europe, which gradually disappeared after the advent of agriculture. Wild horses live freely year-round in Exmoor, untended by man, in the mountainous landscape on the border of Devon and Somerset in south-west England. Elsewhere in the British Isles they maintain meadows and pastures by grazing rough vegetation. They are protected as a national heritage site in Exmoor National Park.

Milovice has the first ever herd of these horses in the Czech Republic and Central and Eastern Europe. The Exmoor horses are endangered because they are rarer than the giant panda – fewer than 1,500 of them. All horses from the local herd are registered in the stud book, have names, international passports and their pedigree is known. 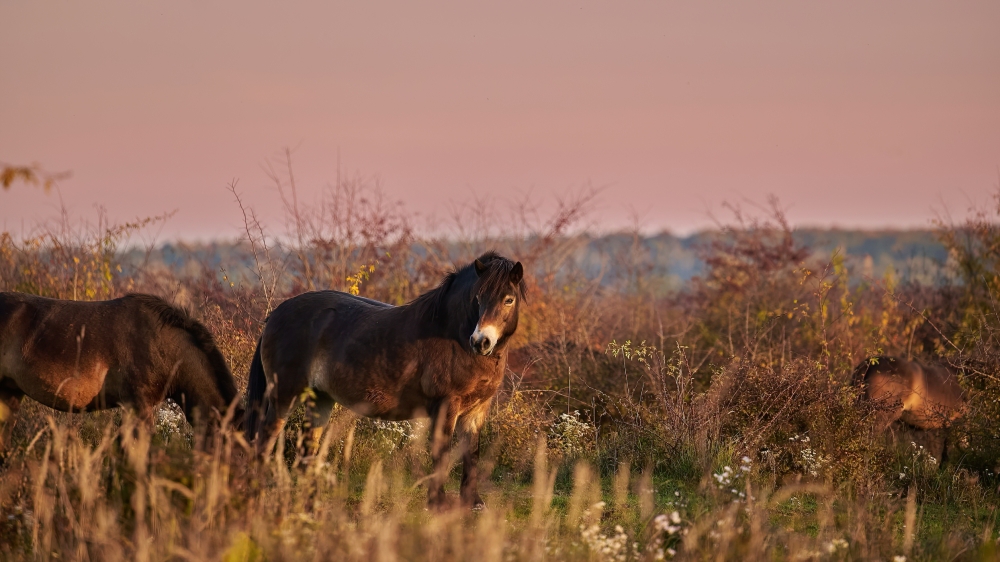 Wild horses have distinctly different winter and summer coats, a short head, small ears, a long tail, so-called frog eyes and extremely thick, compact hooves. Their colouring is the same as that recorded by prehistoric hunters on cave walls several thousand years ago. The typical wild horse is therefore a bay, an animal with a brown coat and black veins on its mane and tail, and with black-coloured lower limbs. Modern genetic analyses a few years ago found that all wild horses from the Iberian Peninsula, through western and central Europe to the eastern European steppes and Asia were so coloured. It was only after the advent of forests after the end of the last ice age that black-coloured horses began to appear. Scientists explain this by the change in environment and the spread of forests, where darker colours gave horses better protection from predators. 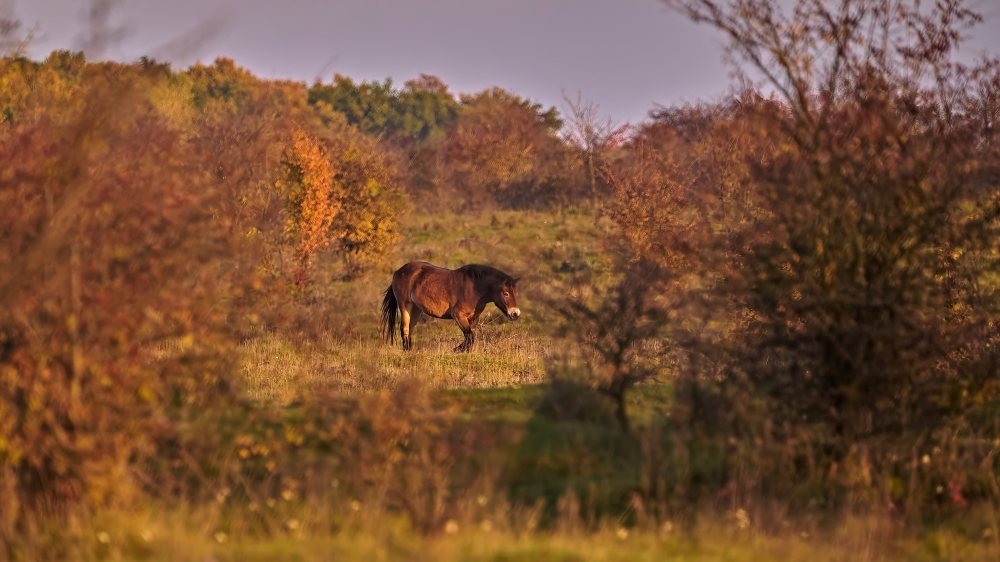 Wild horses may have a faintly distinct grosgrain on their summer coat, which is slightly lighter than the surrounding area. Scientific research has also found a hint of grooming in wild horses in prehistoric times. Among the features of Exmoor wild horses is a distinctly light colouration around the nostrils and immediate eye area. A lighter, so-called floury colouration is also found on the belly of some horses, but, as with Przewalski’s horses, it is not typical of all horses. (Přírodní rezervace Milovice | Česká krajina. Domů | Česká krajina [online]. Copyright © Copyright 2009 [cit. 20.10.2022]. Dostupné z: https://www.ceska-krajina.cz/rezervace/prirodni-rezervace-milovice/) 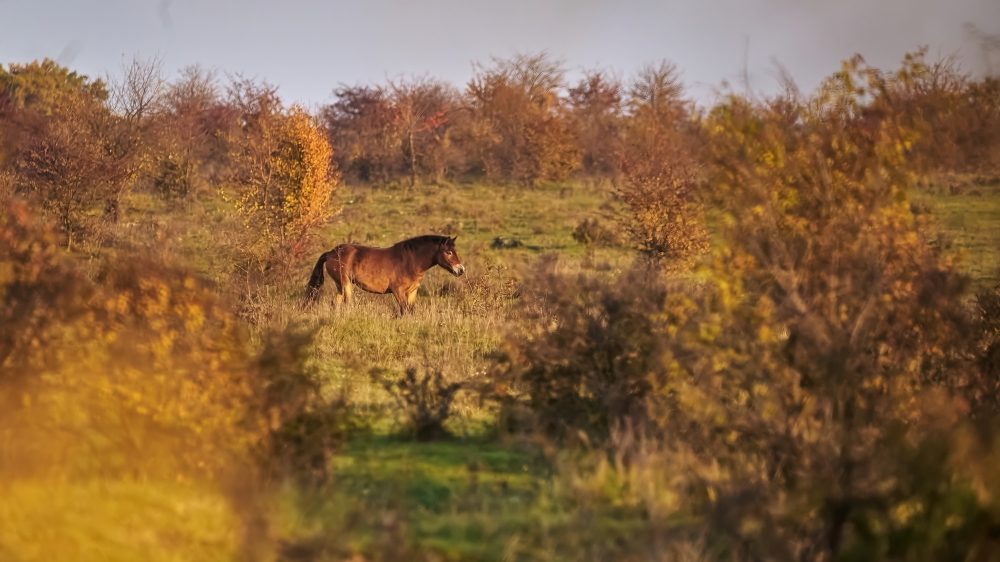 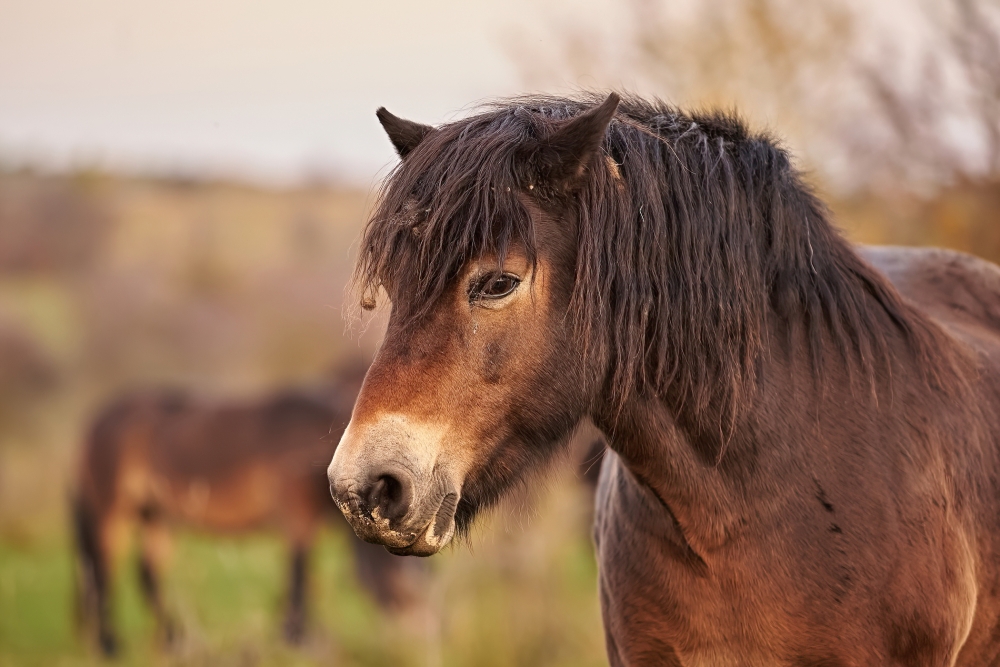 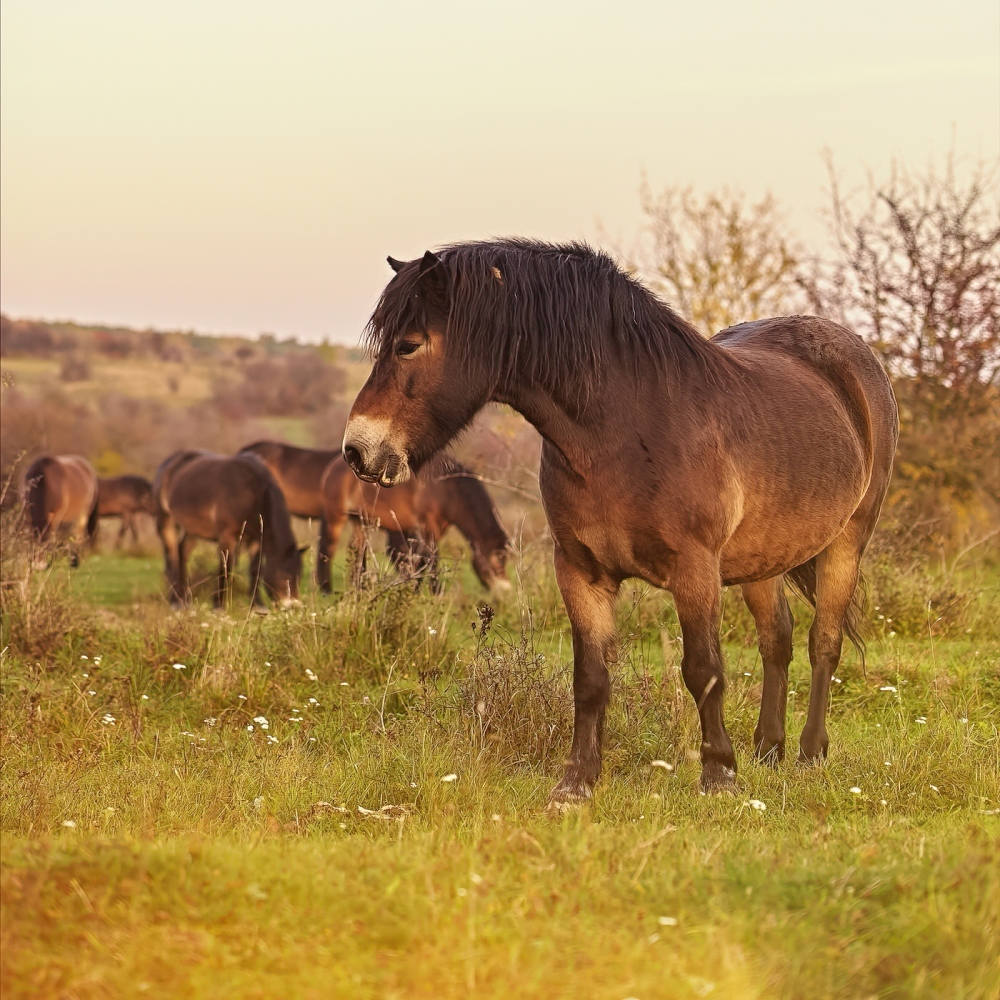 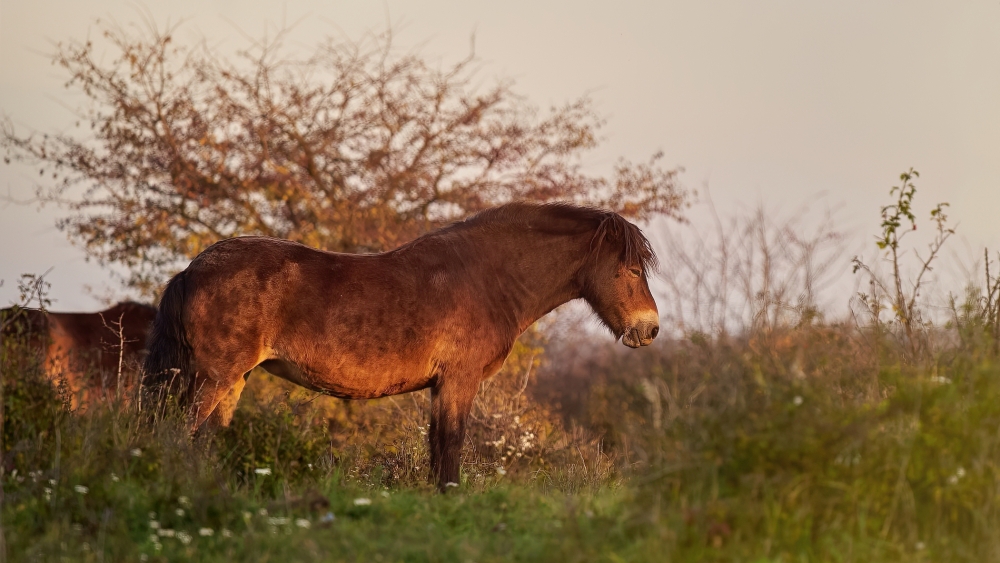